The DJI Phantom 2 drone is a premium UAV that’s clearly aimed at the expert segment market. It features a gimbal for a GoPro Hero4 Black Edition camera to let users take the best video possible. Developers have even authored official downloadable DJI gimbal software to help owners get the most out of their new drones by calibrating the camera pivot. Considering all the buzz about this drone in the industry, we decided to review the unit and weigh its features against the price tag to help you know if this is the drone for you. 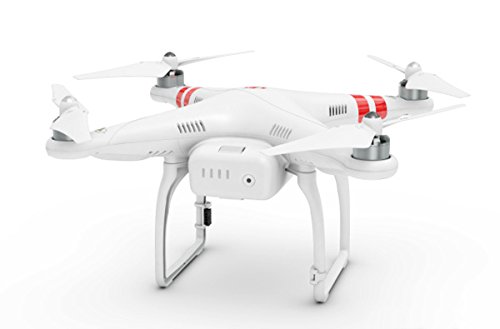 While you could theoretically fly the Phantom 2 indoors, you’d need a lot of space to do so. This is a fairly large drone that can move at a maximum speed of 15 m/s, though the manufacturer doesn’t recommend pushing it to these limits. The controller uses a standard pair of joysticks, which makes it easy to fly for anyone who may have flown a regular RC airplane in the past. Pushing the sticks together at the same time will start the motors up. A few gentle pushes on the throttle stick is all it takes to get the drone aloft.

Some users have complained that it’s easy to accidentally push both sticks together while in flight, which will suddenly stop the motors and cause the drone to rapidly descend. A little practice, perhaps with no batteries in the remote control, is all it takes to prevent this.

The remote control is fairly heavily when you put the batteries in it, which makes it easy to use during flight. It sometimes suffers from interference from nearby mobile phones, but it seems pretty stable otherwise. Unlike most of its competitors, the Phantom 2 actually has battery capacity indicators on the remote itself, which helps to prevent situations where you don’t know you’re running out of juice.

While you’ll need to buy four AA batteries for the controller, the Phantom 2 kit does come complete with:

The included gimbal works exceptionally well when paired with a GoPro Hero4 black edition camera, but it won’t work with any other device. This includes all other GoPro models.

The Phantom 2’s biggest advantages come in the form of an onboard microprocessor that handles battery consumption and flight stabilization. This prevents the most embarrassing types of crashes, which in turn keeps most users from damaging their new drone.

The intelligent control subroutines also prevent pilots from losing control of their UAV while in flight. The Phantom 2 is supposed to automatically return if it loses contact with the remote control for a certain period of time.

Bonus read: If you're still not convinced the DJI Phantom 2 is the perfect drone for you, why not check out our list of best quadcopters on the market today?

Perhaps the biggest disadvantage comes in the form of very specific camera requirements. The GoPro Hero4 Black Edition isn’t an inexpensive camera. It’s certainly worth how much it costs, but it serves to drive the Phantom 2’s high price tag even higher.

If you already have a different GoPro camera, then you’ll need to either replace it with a new one or look at some of DJI’s other offerings. The Phantom 2’s large size also means you might have to register it in your jurisdiction, which is a problem for some users.

One user feels that the DJI Phantom 2 is an excellent vehicle for individuals who want to make some custom parts. The review in question actually opined that it’s possible to customize the gimbal to work with other cameras. Another pilot remarked that they don’t have any problem with the drone flying away.

A third pilot had the opposite experience, though. This might indicate that users respond differently to the unique microprocessor-controlled flight apparatus. Those who haven’t flown a drone before might not be comfortable making the leap to this kind of technology.

While it certainly can give some users sticker shock especially when the additional cost of a compatible camera is factored into the price, the DJI Phantom 2 is a reliable drone. It solves many of the control issues of its predecessors. Some users will find it difficult to get used to the control scheme and others will want something that comes with a camera. For those that already have the prerequisite equipment, though, this is probably their best option since it’s designed to shoot excellent video from that type of camera configuration.

If you have any experience flying the Phantom 2, then let us know because we’d love to hear about it.