China-based drone producer DJI released its S900 hexacopter a few years ago, but it still remains a powerhouse of a flying platform. The DJI S900 professional hexacopter exists for pretty much one purpose, and that is to meet the demands of any aspiring or professional cinematographer or photographer who wants to capture some truly spectacular aerial footage. To put it succinctly, the Spreading Wings S900 is a truly impressive drone. That said, this is a professional grade image-capturing aerial platform and its price tag reflects that. Read on for a complete DJI S900 review and analysis.

Maximum flying time for the DJI S900 is up to 18 minutes with a 6S 15000mAh battery. This is an estimated time, considering a total weight of 6.5kg or 15 lbs and in calm weather.

For the S900, compatible flight controllers include WooKong-M and the highly regarded A2. The in-flight stability of this hexacopter, which is of course hugely important to capturing high-quality footage, is one of the S900's most stand-out qualities.

The S900 fully supports the well-regarded and exceptionally stable Zenmuse line of camera gimbals. The cameras that you can use with this gimbal include the Blackmagic Pocket Cinema Camera, Sony NEX-7 or the popular Panasonic GH4. 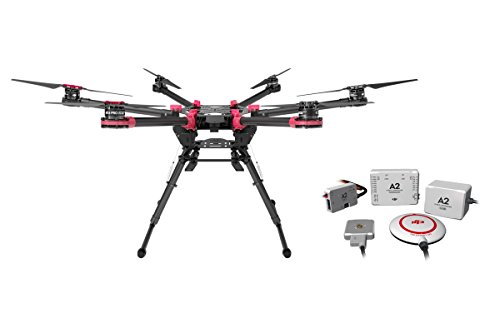 Also, the DJI S900 uses composite materials that are lightweight but strong.

The S900 is relatively heavy. Flying a drone this size can be a bit intimidating, and it is really intended for users who have some experience flying drones. Though it may be loads of fun to fly, it is definitely more a professional aerial camera platform than a toy.

Flight controllers are the devices that keep your aircraft stable. The DJI S900 includes flight sensors, such as accelerometers and gyroscopes, which communicate with the FC. These inputs give the FC the necessary data that helps keep the drone stable in flight. The DJI Spreading Wings S900 professional hexacopter comes with an A2 flight controller and a Z15 Gimbal of your choice.

To fly the S900 hexacopter, there are several transmitters on the market to choose from. The FC software will help you to pair the transmitter to the drone. While it is certainly possible to use one transmitter to control both the drone and the camera gimbal, a two-man operation is ideal, with one controlling each with their own controller.

Amazon currently offers the DJI S900. This offer includes the airframe, the A2 flight controller and the choice of a range of Z15 gimbals. You will still need to acquire a remote such as a Futaba, and the Datalink if you want to use waypoints.

DJI, a young company based in China, entered the drone market early and has since earned a name for itself as a prolific producer of highly tuned and well-engineered drones. Their DJI S900 excels in several aspects while falling slightly short on a couple of points.

The S900's low-hanging gimbal and retractable landing gear allow for a full range of motion for whatever camera you have equipped. For the professional cinematographer or photographer, a stable, high-definition image is the name of the game, and the S900 hexacopter delivers admirably in this department.

One user complained that his experience with DJI's customer service was poor. After his S900 was damaged, he couldn't get a specific replacement part. Further, he was frustrated that he couldn't find an authorized repair shop that would agree to work on his S900.

Another user posted a five-star review and expressed much satisfaction with the S900's ease-of-use and wonderful in-flight stability.

Due to the minimal number of customer reviews for the S900, this last item is from a user of the S1000, which differs from the S900 in the addition of two more propellers and a higher price. This user marveled at the drone's technical achievements. However, he expressed frustration that after a few months he has yet to get some of the drone's automated features to work properly.

To get the most out of the S900 and to fully equip it will require a considerable investment, perhaps upwards of $10,000. Other brands offer the same price point but can't measure up to the overall value that the DJI S900 offers in terms of its technology and performance. But the true value of the DJI Spreading Wings S900 professional hexacopter is in the quality of the images it can capture. This where the S900 really outshines the competition and allows us to recommend it with little reservations.

If you have any first-hand experiences of the DJI S900, or would like to ask a question or comment in any way, we encourage readers to share and add to the conversation.

Drone Accessories Recommended For You