Click on any list of the best drones from first-time flyers to experts with professional needs, and you’ll find DJI drones topping the charts in every category.

The Mavic Pro changed the drone industry and opened up a new line of expectations about what drones could provide. It was easily portable without sacrificing image quality or power. The Mavic Pro was one of the first to promote extended features in a truly portable manner.

DJI didn’t touch its flagship drone for nearly two years until it announced a relaunch of the Pro: the Mavic Pro 2.

As with any next-generation product, drone enthusiasts wondered whether the upgrade was worth it. Do you get more with the Mavic Pro 2 that dramatically changes the value of the drone? Or will you be happy enough with the earlier model?

Read our full review to find out.

Quick Navigation
What Is The Mavic Pro 2?
Specs
What Comes In The Box
Features & How It Flies
How It Differs From The Mavic Pro
Pricing
Mavic 2 Pro And Mavic 2 Zoom
Mavic 2 Pro VS. Phantom 4 Pro
How It Compares
Comparison Table
What We Think

What Is The Mavic Pro 2?

The Mavic 2 is the follow-up to the well-reviewed Mavic Pro. For the first two years, Mavic didn’t change its original formula, and it looked as though DJI didn’t plan to offer an update. Even with the release of the Mavic 2, it’s clear to see not much has changed.

Mavic cleverly left behind the features that were well loved and instead of adding a few things that would make it more imaginative.

Before comparing it to the Mavic Pro and other models in the Mavic line, let’s dive straight into the specs of the new Mavic 2 Pro.

DJI provides a full list of specs on its website, but we’ll recount them here for simplicity:

The specs of the Magic Pro 2 Camera include:

Here are the overall specs for the aircraft itself:

Finally, it is worth pointing out that the Mavic Pro 2 is not waterproof in any way. If you’re looking for an aircraft suitable for poor weather conditions or water landings, you’ll need to look for an explicitly waterproof drone.

What Comes In The Box

DJI includes everything you need to fly in the box. Open it up, and you’ll find all the essentials including:

Among instructions and literature, you’ll find:

Features & How It Flies

Given that the Mavic 2 Pro is both a camera and drone, there are a huge number of features to cover. We cover the most important features that set DJI’s products apart from other consumer-grade drones.

In flight, DJI says the Mavic offers more speed and longevity than other drones without adding noise pollution. The new version flies for 31 minutes, which is the longest projected flight time for a consumer product and beats the Mavic Pro by three minutes. It also operates at a max speed of 72 kilometers per hour or 44 miles per hour when used in sport mode and when wind conditions are favorable.

The DJI Mavic 2 Pro also benefits from proprietary omnidirectional obstacle sensing. The aircraft uses sensors placed on every side of the craft that make it easier to protect your drone. The Advances Pilot Assistance Systems (APAS) helps you avoid birdhouses and any other obstacles directly in front or behind it.

DJI’s sensors also get some extra support from the added bottom auxiliary light for conditions where low-light might otherwise impede the low-light sensors.

We can’t emphasize the drone’s ability to avoid obstacles enough. When it tracks targets, it uses a 3D map to plan the correct flight path, but it also reads, interprets, and dodges anything it perceives as a barrier on that flight path. It does all this without interrupting the camera to preserve the integrity of your photos and videos.

One of the most talked about features is the Hyperlapse feature. When the aircraft shoots video, it keeps it stable and then automatically processes them. You can then take the photos or videos from internal storage or the inserted Micro SD away with you.

While the Hyperlapse is indispensable, we like the Task Library feature. Here, the Mavic saves your flight patterns for complete accuracy. Want to capture precisely the same route at sunrise and sunset? Use your Task Library, and you won’t miss a beat. The HyperLight photo feature further enables this because it works with low-light to create high-quality images.

How It Differs From The Mavic Pro

Do you already own the Mavic Pro? Maybe you’re wondering what features you’d sacrifice by springing for the original model compared to the Pro 2?

According to DJI, the Mavic 2 offers improved specs in “almost all aspects” compared to the original model. It includes increased specs in the following areas:

Both DJI and independent reviewers found that the camera updates are a central component of the new model. In fact, you’ll notice that when you go to buy the product, you’ll see that it comes in two products: the Mavic Pro 2 and the Mavic 2 Zoom. We find that a bit confusing considering DJI also offers another line of products.

The most significant difference isn’t so much in camera performance but in the addition of the front-facing camera. Rumors that DJI would include the option to switch out cameras with a modular gimbal, but those whispers seem to be unfounded.

One of the most controversial design choices was adding scale to the Mavic Pro 2. Given that the industry lauded the Mavic Pro for its portability, the decision sparked some contemplation across drone hobbyists at large. However, an increased size also means its faster and flies through the air at an impressive clip for up to 44 miles per hour.

The battery life also saw a boost of three minutes (from 28 to 31), which those who enjoy pushing their drone to its limits will likely welcome.

Overall, reviewers say the updates added to the Pro 2 don’t justify adding the device to your collection unless you need an upgrade or replacement anyway.

DJI offers the Mavic Pro 2 on its own or as a part of a larger bundle. Prices vary according to what package you buy. 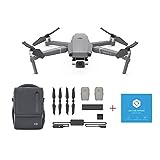 The most significant difference between the Pro and the Zoom is camera design. Both offer incredible cameras, but the Mavic 2 Pro’s camera is unique not only compared to other cameras in the range but also to drone cameras generally.

A larger image sensor size makes the difference with the Mavic 2 Pro. But with a larger image sensor, it was also critical to ensure it still fits the drone. To meet the challenge, DJI made a sensor that featured an external square shape with a rounded internal lens.

The Mavic 2 Zoom doesn’t have a large image sensor and thus doesn’t see the same design.

Additionally, the Mavic 2 Zoom features a zoom lens (as the name suggests) and the Mavic 2 Pro offers a fixed lens. A zoom lens provides a different variety of shots that you can’t get with a zoom lens. You can zoom, go wide, and achieve a film camera type look.

A zoom lens makes all the difference in those scenarios where you want to capture quality video or stills, but you can’t risk getting too close to the subject. You can also change your mind in real time, which isn’t possible with the Mavic 2 Pro. 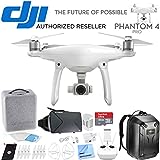 The Phantom 4 Pro is the closest market competitor within the category of professional photography drones.

In many ways, the Phantom 4 Pro and Mavic 2 Pro remain very comparable in both price and basic specs. Both have a max speed of 45 mph, and the Phantom offers only one less minute of flight time per fully charged battery (30 minutes).

However, the Mavic 2 Pro also offers several advantages. You receive an 8 km range on the Mavic compared to the Phantom’s 7 km range. The Mavic range also provides slightly better obstacle avoidance than the Phantom.

The Mavic’s internal system goes so far as to recognize your hand as an obstacle, so you can’t catch it. The Mavic 2 also comes with 8 GB of internal storage compared to none on the Phantom.

The Phantom 4 Pro does have a few advantages. People like the controller because it offers a built-in screen that saves your phone battery. The Phantom also boasts a better resolution and frame rate, and some testers say the Phantom feels sturdier than the Mavic.

Ultimately, the Mavic 2 Pro comes off as more of a next-gen drone with features like Hyperlapse and a longer flight distance. The Phantom 5 Pro might upstage it, but for the same price, we’d choose the Mavic.

We already highlighted the key selling points of the Mavic Pro and the Mavic 2 Pro, which are very comparable drones. Now, let’s see how the next-gen Mavic stacks up against its closest DJI competitors: the Mavic 2 Zoom and the Phantom 4 Pro.

Ultimately, the DJI Mavic 2 Pro is one of the best professional-grade drones available on the market, and it provides considerable upgrades from the original model.

While we wouldn’t recommend trading in a brand new DJI Mavic Pro for the Mavic 2, if you’re already in need of an upgrade, there’s plenty to benefit from here. Additionally, it does offer features that you won’t find on other DJI products within the same price range.

We wouldn’t say the Mavic 2 Pro beats all the other DJI drones because at this product level, finding a drone that meets your distinct professional needs matters more than finding the best overall product. However, anyone who invests in the second-generation Mavic Pro will find themselves satisfied across the board.

Whether you’re still a novice pilot or you want something to show off your flight and photography skills, the Mavic 2 Pro offers everything and more.