The budget-friendly UDI U818A camera drone, which sells for roughly $40, may be a good option for many aspiring pilots who prefer controlling the flights themselves, rather than rely on a computer. This drone is easy to use, and ready to fly straight out of the box. The UDI U818A drone also comes with a remote control and battery. This detailed UDI U818A review will allow you to make an informed decision based on our comments and suggestions. The criteria that were used to create this UDI U818A review included user-friendliness, and customer ratings and satisfaction. 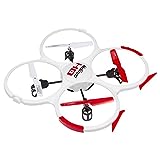 
One notable feature of the UDI U818A that many customers reviews praise is the 360° eversion maneuver. This allows users to automatically do a flip in the air with the hit of a button, as long as the drone is at least 10 feet in the air. Also, the drone uses a 3.7V LiPo battery, which takes 60 minutes to charge. In addition, the remote control can communicate with the drone at a distance of up to 300 feet over a 2.4-GHz radio signal. Regardless of all of these specs, the skill level needed to fly this drone is beginner.

The UDI U818A blends the benefits of large and small drones into one. This is due to the spacing of its rotors, which increase flight stability without hindering its speed and sharp maneuvering. Also, the UDI U818A quadcopter comes with two flight modes. The first mode limits the speed of climbing and turning, and is recommended for beginners. The second mode removes these caps to allow for faster speeds, and unleashes the full potential of this drone.

As soon as the battery is fully charged and you are ready to begin having fun with the UDI U818A RC quadcopter, practice is suggested in order to get the hang of flying and maneuvering. It is ok to practice indoors as long as the area is not crowded. An open area is necessary to avoid damage to the drone or other objects. At the very least, it is recommended to practice landing and hovering in order to get a feel for the mechanics of the drone.

After practicing the basics, finding an open outdoor area such as a large park is appropriate. However, it is not recommended to fly outdoors if conditions are windy. Due to its low weight, the wind can easily result in instability and damage to the drone. This is one area where this drone, unfortunately, does not excel (flying through wind) due to its weight.

The UDI U818A review of the controller, which weighs about 10 ounces, describes it as having a very simplistic plastic design. It fits nicely into the hands, where all buttons are accessed with ease. Also, a single set of batteries can last for several hours of flying.

The LCD displays useful information such as the strength of the signal, the amount of battery remaining, and how much thrust is being used. The two controller sticks are used to move the drone in the appropriate direction.

*The memory card is useful for transferring photos and videos to and from devices, and the screwdriver is used for adjusting and swapping propellers.

Based on the suggestions and information provided throughout this UDI U818A review, we believe that this drone is a good option for those who are either beginners, or are looking for a quadcopter at an affordable price. For its $40 price point, the drone does what is expected, and is easy to learn how to use and have fun with. If you are looking to enjoy flying a quadcopter around the park for fun and capture some cool shots, this drone will definitely do the job without requiring you to dish out a fortune.

However, for those individuals who are looking for a drone to be used for high production filmmaking and video production, higher end drones may be the way to go. This is due to the inferior camera specs and flight time of the the UDI U818A. Also, its light weight has posed a problem to many users who have experienced instability during windy conditions.

It is a great quadcopter, and is pretty strong for the price. Although it may seem cheaply made, even after hitting the ground or wall several times, it still works. This is the perfect quadcopter for those who are recently getting started to immerse themselves in the drone world.

Also, the drone is very nice for the money that was paid for it. The UDI U818A flight time of roughly under 10 minutes is enough to have some fun and capture some amazing shots. The only downside is having to charge it for about an hour between uses.

Furthermore, being able to fly it straight out of the box makes it extremely user-friendly, as some reviewers mentioned. It is not a hassle to set up. That is great for both beginners, and those who do not want to get frustrated with confusing instructions. As previously stated, many users wish that the UDI U818A flight time was extended to more than 10 minutes.

This UDI U818A review provided numerous suggestions and information in order to allow you make the best decision about purchasing this drone. We believe that for the price this is a great option. It is also a great drone for beginners due to its simplistic design and ease of usability. Hopefully, this extensive UDI U818A review has informed you with everything you need to know about this quadcopter.